Cheating is the Way To Pass

While Democrats gain confidence in former Vice President Joe Biden’s lead in the election polls, others note that their hope may be short-lived. Biden’s polls appear similar to those of 2016 Democratic presidential candidate Hillary Clinton, who lost the election despite winning the popular vote. Clinton is often criticized for her failure to campaign in swing states, which may have led to her loss.  Biden, likewise, could face an overlooked threat to his campaign.

Rapper and Birthday Party/American Independent candidate Kanye West has officially established his name on the ballot.  In several states, West is running for president with spiritual coach Michelle Tidball as his vice president.

“Kanye is destined for the presidency,” Zay-G, good friend of West, said. “He’s a star with reality TV experience – that’s all you need for office.”

West, who possesses a variety of leadership qualities, is the biggest factor threatening Biden’s victory. Unlike Biden, he attracts supporters through an authentic attitude towards the government.

“I used to be Biden 2020, until I realized the man is 78 and supported segregated busing – we need someone new and original,” Hamala Karris, ex-Biden supporter, said. “Kanye’s unique perspectives converted me into a West 2020 voter. ”

West’s unique campaign is distinct from others in a variety of ways; for example, West created his own political party – the Birthday Party – for the sake of his presidency. The creation of the Birthday Party was no easy task for West, as it was an emotional and thought-provoking process.

“Mr. West created his own party because he is an artist. The flavorless labels of ‘Democrat’ and ‘Republican’ failed to suit him,” a spokesperson for the Kanye/Tidball campaign stated. “Kanye hates surprises, unless they’re presidential campaigns, so we couldn’t be the Surprise Party. He also believes other types of parties are ‘2 lame 4 dis fame.’ As serious patriots, we believe no campaign should ever be too lame for his fame.”

West’s vice presidential pick also provides an advantage for his candidacy. As a spiritual coach, Tidball has professional experience exploring human connections with the universe. West, being a Gemini, must rely on her intuition to succeed.

“When Kanye first announced his campaign, I thought, I can’t trust a Gemini. If you’re a Gemini or Scorpio, I know something’s off with your aura,” a current West supporter stated. “However, when I heard that he was running with a spiritual coach as the vice presidential pick, I knew the nation’s fate was in good hands.”

With West’s spiritual balance, politically authentic views, and name on the ballot, the Birthday Party may become an unstoppable force in 2020. As the election nears, Biden must avoid looking east – because the entire nation will be facing West.

Sophomore Prisha Puntambekar has enjoyed writing from a young age. Outside of journalism, she's vice president of Sundevils for Senior Citizens Club and loves to golf.
Previous The Race for District 3 San Diego County Supervisor
Next California GOP Ballot Boxes 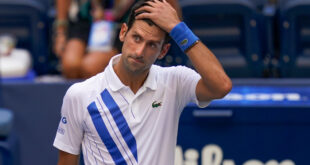 The US Open is a world-renowned international tennis tournament. Since 1881, the US Open has …