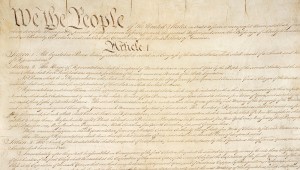 Oregon community college. NAU. Sandy Hook. These nightmarish school  shootings made guns appear to be the enemy of the United States. However, guns don’t shoot themselves. The person holding it becomes responsible for every shot fired.

With policies like the Brady Law, background checks are conducted on people purchasing guns. If they have any record of felony or mental instability they will be denied a gun. The measures taken by the government to prevent guns thus far are almost a threat to the  second amendment.

The right to bear arms is one the principle rights granted to America’s public from the constitution. No presidential order based off recent violence should endanger rights such as these.

The right to bear arms has been a principal right for several years, and personally, stricter gun laws on mentally stable people who have had no record of violence won’t make the shootings stop. It’s a tragedy, that’s for certain, but there’s only so much the government can do to stop this within constitutional terms.

For example, if a student is found with marijuana on school grounds, he is punished, and other students are not affected because they don’t use drugs. The issue with guns is that people say that guns are the issue, but the real issue lies within the minds of the mentally unstable.

There is no law that can be effective enough to catch all individuals willing to harm others. The fact is, guns don’t shoot themselves, and the issue is not in America’s legislation, but present in the agendas of the mentally ill.

In order to combat the threat of gun violence, we need to continue to enforce the Brady Law and conducting accurate background checks. The mental illness that causes people to commit such acts of violence is the issue behind it all; not the weapons themselves. Guns are a defensive weapon granted to Americans with no record of criminal behavior, and the guns are not the issue, but rather, the emotional imbalanced individuals wielding them.

Jordan is a Senior and runs on the MC Cross Country & Track team. She loves to laugh and tries to make puns all the time which aren't really funny. She is an energetic, friendly girl who you can count on. She also eats a lot of chocolate and sour patch kids...so maybe that's why she has so much energy.