The Palestinian Struggle for Liberation Affects Everyone

Biden’s Handling of the Border Crisis

America has come a long way since its birth as a country. This great country has overcome wars, slavery, the depression, and much more. So when instances such as this current Miss America pageant happen, the country is set back seventy years. I begin to question how accepting America actually is. 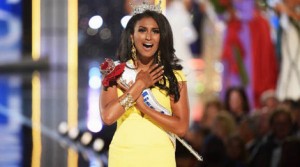 National Miss America pageant, Nina Davulur, the first winner of Indian descent, took home the crown. In response to this, a great percentage of the population was in outbreak blaming her victory on Obama. Comments were made that she could not have won the pageant because she was not an American and even making accusations of her being a terrorist.

Discrimination like this is not only horrific but also extremely ignorant. Just because a person is of different skin color does not make them a terrorist or not American.

According to USA today, “She was referred to as “the Arab,” by some and other commenters noted “This is America, not India.” One called her “Miss 7-11.”

Typically the stereotype of the Miss America Pageant is a very “All American” looking female. Sadly when faced with diversity, America has to divulge themselves in stereotypes degrading people of different races.

The year is 2013; one would think that people would be able to accept and cherish the differences in others but sadly this is not the case.

As pageants go, I am all for “world peace” and I believe that people should not be discriminated against because of their skin color. The fact that these instances are still taking place in America and around the world, are absolutely repulsive.

Speedy is the Editor of the most entertaining section, the Entertainment section. Raised by wolves, he is always hungry for another taco. He plans on attending either Oxford College or Cambridge University. He aspires to be the first human to visit Saturn. His favorite meal is burritos and churros. He is a Senior.
Previous Free Opinion: ObamaCare
Next Review: “Lucky 7” – F

Victim-Blaming and the Propulsion of Rape Culture