The Rising Demand for Young Leaders in Office

The Wrongful Politicization of Humanitarian Issues

Let’s Talk About Defunding the Police.

Every teenager knows the dreadfully familiar sound of the alarm clock. After a long night of cramming for an exam, or finishing up the outrageous amount of homework assigned, all adolescents really need is sleep, but with schools starting before 8:00 A.M, students are denied the minimal hours of sleep needed.

According to the New York Times, the majority of adolescents need on average nine hours of sleep a night, when in actuality, the average number of hours teens spend sleeping is seven.  This issue has a great deal to do with the questionably early start times integrated in several high schools.  According to The New York Times, typical sleep cycles for teens begin at 11:00 P.M and end at 8:00 A.M. This means that getting up at 5:00-6:00 A.M forces them to wake up from a deep sleep five days a week.

Students cannot be expected to focus with such little hours of sleep. If the  sleep cycle for teenagers goes to 8:00 A.M and class starts at 7:30, adolescents brains are not even supposed to be awake yet, therefore, not functioning to it’s full capability. This battle against biology cannot be won. The common goal of the education system should be to benefit the students it serves, and starting schools before 8:00 is of no benefit to those attending.

Not only is starting school so early a focus issue, it  can also lead to serious health problems, like sleep deprivation. According to the Huffington Post sleep deprivation can lead to eating disorders, diabetes, obesity, cardiovascular problems, reduced immunity, depression, substance abuse, behavioral problems, suicidal thoughts or even impacts on brain development.

Forcing an early start is not benefiting the students attending. The only way to get more productive, healthy learners on campus is to have a later start, after 8:00 A.M.

Allison Burgess is a senior and sports editor for the MC SUN. She likes to run track and field, hang out with friends, play with her dogs and go hiking.
Previous Mayweather vs McGregor fight knocks out expectations
Next High school hate crime culture 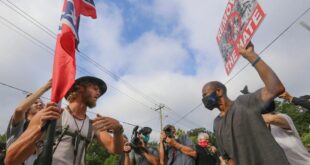 Black vs. Blue: A Battle of the BLMs

In a sweet-sounding sentiment, a Blue Lives Matter group in New York makes an innocent …