Running Around the Crisis

With four wins this trimester, the MC Girls Water Polo team has finally wrapped up their season. For the six seniors on the team, this was their last time to share the pool with their Water Polo family, and the moment  was bittersweet.

“The last game was very emotional. Some of the girls, especially my best friend Kennedy and I have played together for five years. I realized it was our last time ever playing together and it was definitely hard,” Captain and Senior Carly Rothfield said.

Water Polo has allowed Rothfield to develop some of her talents such as her interest in working with kids.

“Water Polo has given me lots of unexpected skills like my interest in teaching kids,” Rothfield said. “I am now a water safety instructor so I teach swim lessons.”

In addition, Water Polo has allowed these Seniors to grow as people by giving them an opportunity of self expression.

“I have grown a lot as a person. Being captain, I have learned how to speak up for myself and others to try and reach an agreement for the whole group,” Rothfield said.

For these six seniors, graduation will mean leaving behind a sport that has been a constant in their lives, for many  since Freshman year, a shocking change especially for one Senior captain Haley Josten.

“I’ve tried so many other sports in the past and I never took a liking to any of them, but I knew right when I joined club Water Polo that this was the sport for me.” Josten said, “Water Polo has been a constant in my life ever since middle school and I’ve made so many new connections through it.”

While the girls may have lost their last game, for Josten, the score did not matter so much; it was what that last whistle meant.

“After all the games I have played with this team and in the pool, it’s still hard to believe that I will no longer be walking onto that pool deck every single day,” Josten said.

While the girls have loved their time on Mt. Carmel’s Water Polo team, it is time for many of them to look forward to college and what the future has in store.

Colin O'Malley is a junior at Mount Carmel and the current feature and news Editor of the MC Sun.
Previous Nancy Making Moves
Next Redefining Full Time Work 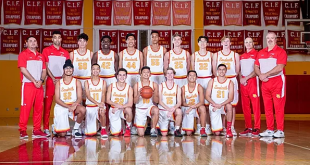 A Shot in the Right Direction

With the support of the coaches, players and an excited Red Sea, the MC boys’ …