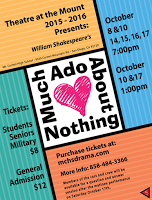 Since the retirement of beloved drama teacher Diane Jones, MC drama has been working to usher in a new era of theatre. Stacey Walker, previous stage manager of Broadway shows, is leading the movement forward with the infamous Shakespeare play Much Ado About Nothing.

MC’s version of the play, however, takes Shakespeare’s classic script and inserts it into 1930’s South Carolina. This stylistic option will lend a new perspective to an old-fashioned romantic comedy.

“First I thought it was kinda odd that it would take place in the Great Depression because there’s a masquerade and wedding, but once Mr.s Walker explained it to me it made sense. It’s set in a parallel universe in a very small town by the beach, so its local much like the original play itself,” senior Jason Goldfarb said.

The play Much Ado About Nothing will be Theatre at the Mount’s first Shakespeare in 12 years. The themes of love, betrayal, and happiness will captivate the audience in this Shakespearean comedy.

“My character is the constable who takes himself very seriously, but still finds himself at the butt end of a joke. I do like the 1930’s twist because I like the new approach our drama teacher is taking on this piece.” senior Zachary Crooks said.

All the technical workers building sets for the five acts that take place in the play. The actors are also servicing all their time to memorizing their lines by the approaching deadline of October 10th.

“Six weeks is the average time for a play like Much Ado About Nothing, but it is a little bit of a time constraint that we have to deal with,” senior Hailey Barry said. “ Six units with a rotated system that will shock the audience.”

The impression that Mrs. Jones left on Theatre at the Mount will be unforgettable ,but Mrs. Walker is here to bring a new life into the arts with her debut play Much Ado About Nothing.

Daniel Kenney is a junior at MC. He loves to hang out with friends on the weekend. He also likes to play baseball for MC. He loves his family, thanks them everyday for what they've done for him. Danny also enjoys long walks on the beach, and fishing with friends.