Last friday was the homecoming game where the Sundevils triumphed over the Ramona Bulldogs. But the game was not the only attraction that night.

For the past week, students from each class have been working together to build homecoming floats.

“Paris was assigned to [the freshman class]. Our theme is cities, and we’re Paris.  We have a little cafe,  an eiffel tower, and a lock bridge,” freshman Shelby Mckinney said. “We have a lot left to do, but we’re going to get it done.”

Every class was assigned a city for their float to match the homecoming theme “Paint the city Red”.

The sophomores received the city of London.

“We have London. I love it. I love the culture of it. It’s really great,” sophomore Alissa Penaranda said. “It takes a lot of work, but once you complete it, it looks really great. It’s very rewarding.”

Penaranda encourages her fellow classmates to participate in float building, perhaps for next year.

“First, it’s really fun and a great bonding experience. Second, you just want to have something to do surrounding homecoming,” Penaranda said.

Float building fosters healthy competition between the classes as each class aims to build the best float.

“To be honest, I’m not looking at the other competitors because I’m really looking at our float and what needs to be done. But they all look great,” Penaranda said. “I still think ours looks the best of course.”

“I’ve been doing float building since freshman year, so I felt like I had a duty to come out here and build an awesome float,” junior class president Triana Marasigan said.

Marasigan represents the juniors, who were assigned the city of Los Angeles. 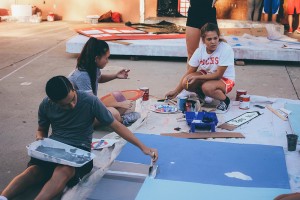 “So far I’m liking it.  I feel like every class wishes they had a different city, but at the end I know I’ll look at it and say ‘this is what I wanted,’” Marasigan said.

Float building is no easy task of course. Every class had challenges  they had to overcome.

“Not a whole lot of guys come help out and a majority of the girls can’t saw anything or lift the heavy wood,” Marasigan said.

Finally, the seniors picked to represent the city of New York. 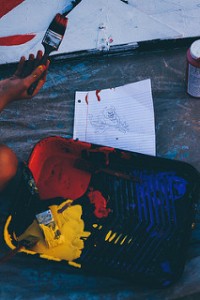 “As senior class president, I have to make sure that the vision that my vice president Jallene  and I want gets executed correctly, and brings the senior class together with the theme of New York,” senior Janhael Viray said. “I like the different colors we incorporated and how we tied it to MC. It’s everyone’s different talents put together on one float.”

It was this mindset that helped Viray lead her class to success. On friday night, the seniors took first, followed by thesophomores, then the juniors, and finally the freshman.

“I love that I chose NY. It’s one of the first cities people think about when you mention something urban. It’s one of the most iconic places to visit if you ever think of traveling. I want toturn MC, and incorporate the sundevil way, into a place like New York. “

Steven is now a senior at MC, and Co-Editor-In-Chief of the MC Sun. He enjoys playing volleyball and has been playing it for a number of years now. Besides volleyball, Steven enjoys to eat in his free time. He loves Italian food, Hot Cheetos, and anything that's high in sodium.