On a routine visit to Rady Children’s Hospital last summer, freshman Nicholas Thompson and his family were approached with an idea some find hard to grasp: the wish – the chance to do anything, meet anyone, without restriction of imagination. And on an afternoon in late April, Thompson’s wish crystallized under a new sun, tangibly, via handshake and a familiar smile by Pope Francis.

As organized by the Make-A-Wish foundation, Thompson, his parents Neal and Linda, and his younger brother Spencer, greeted the mild Italian sun with exuberance on a trip to visit Rome and meet the Pope.

“They’ve expanded their scope to include kids that will someday be, even once they’re an adult, in a terminal situation, and we’re benefiting from that,” Neal said, on behalf of his son who lives with Cystic Fibrosis.

Traditionally, Make-A-Wish participants opt for the famed Walt Disney World experience or the chance to surf in Hawaii. But Thompson, with an affinity for mythology and historical architecture, sought out a more singular experience.

“I’m Catholic, so we thought it’d be a good idea to see the head of the church,” he said.

His father notes, “Another big part of the trip was that [Nicholas] likes Ancient cultures – Rome and Greece. It seemed like the perfect [balance], being Catholic but also being able to see the ruins.” 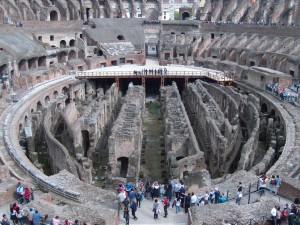 The expertise and connections of their Italian guides, including the savvy Marco (who navigated the streets and security guards with ease) and Vatican Museum tour guide Kaitlyn (who spends her weekends moonlighting for Make-A-Wish), also lent themselves to create a memorable experience for the Thompsons.

“Nowadays, to get through the Colosseum or the Forum, you may stand there for an hour to get in. At the Vatican Museum for example, this gal Kaitlyn […], took us through, just the four of us and our guide,” Neal said. “Similarly  they signed us up for a walking tour of the Colosseum, Forum, and Palatine Hill (where many emperor’s palaces were).”

Of future travels, Thompson keeps Europe, with its varied architecture and historical grit, in his minds’ eye. 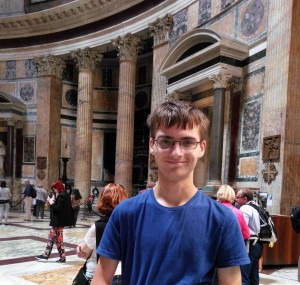 And though Pope Francis didn’t carry much conversation with Thompson, as he met around 20 people looking for some sort of blessing in a belted off area of St. Peter’s Square,  the impression he and his city left on the Thompsons was unprecedented.

“The barricade and the huge crowd of people was definitely different than what we had pictured in our minds. I think whenever you’re travelling to other countries you have to be a little flexible,” Neal said. “It was something that we enjoyed together [as a family]. A bonding experience.”
* The SUN would like to note that May is Cystic Fibrosis awareness month. For how and where you can help, see here.

Self-described as an "ardent archivist", Marianna is currently the Editor-in-Chief of the Sun. When she is not despairing over her beloved television characters (Underwood and Holmes represent) she enjoys listening to movie scores, Andrew Bird, and Beyonce. She also serves the Sun as Photo Editor, and has been a self-taught photographer for four years. Her personal work is available at www.flickr.com/photos/maridock