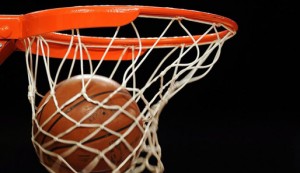 The orange ball pounding against the court sends vibrations throughout the entire gym, as the final buzzer rings and the team strolls off. MC’s girls basketball team has dribbled into the new season successfully, with a whopping victory of 63-16 against Kearny Mesa.

Weeks of preparation go into preparing for games, as each individual practice is an opportunity to improve on key skills.

“We work really hard at practice and continuously go over the plays,” junior Sara Vandenburgh said.

The team has started off the season undefeated, due to their hard work at practices.

“The season has started out great,” junior Michelle Mcfadden said. “We’ve won our first five games and our team has really worked like family.”

Due to their success the team has no major issues to alleviate, however, they continue to give full effort at each practice.

“As a team we can continue to work hard at practice and playing cohesively,” Vandenburgh said.

A main focus this season is defensive tactics, along with other important aspects of basketball.

“We work very hard on defense, being strong with the ball, and making smart decisions,” Mcfadden said.

The team has set their goals high and plans to carry their winning streak throughout season.

“I am most looking forward to winning league and bonding with the team,” Vandenburgh said.

This year’s squad has a large legacy to live up to due to last year’s team making it all the way to State. With the way they are playing currently it looks like league will be a simple swoosh.

Nicole Glidden is a proud Cheez-It addict, who spends her free time binge watching Netflix. She has trouble getting into jeans, due to her soccer calves. Nicole hates running with a passion, yet participates in multiple sports.