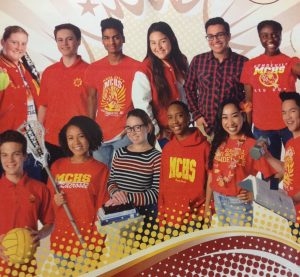 The Sundevil Way champions ideal behavior and encourages all students to act as role models in the community. Because of the high standards of conduct MC is known to cultivate, the Ambassador Program is a perfect fit for the school.

“The [Sundevil Ambassadors] are a group of 12 seniors who [will] go to our elementary school students and teach them about the six pillars of character,” MC Assistant Principal Ms. Ramirez said. She was a major factor in bringing the program to the school.

This is the first year the program has been implemented at MC, although surrounding Poway Unified School District campuses have hosted ambassadors for years. Being the first class of ambassadors, it became critical that the best students for the job were chosen.

“We had extensive tryouts,” Ramirez said. “All the ambassadors were nominated by teachers. Once the nominees came in, I checked attendance and discipline. They had an application to write and from the 60 [who turned in applications] we [conducted]  interviews [based upon which we chose] the 12 students who are ambassadors now.”

Ramirez recognizes the importance of educating youth on positive character traits at an early age and cementing those ideals as they grow and mature.

“Especially with the Sundevil Way and what we are trying to emphasize with all of our students, it’s the perfect time to start while they’re in elementary school,” Ramirez said. “That way when they get here, they already know about good behavior.”

One ambassador, senior Mackenna Gentry, recognizes the influence the program has on elementary students.

“I saw [ambassadors] as a kid and I wanted to be one of them,” Gentry said. “It’s important we have this program because it shows kids as we get older it’s still relevant to learn to be a good citizen by being responsible and trustworthy and that doesn’t really change when you get to high school.”

For the ambassadors, the program has many perks but requires dedication.

“We do have to miss school,” Gentry said. “It takes about an hour. We talk about the six character counts pillars and whatever message [the specific school] wants us to deliver.”

One benefit of the program is that the elementary school children are delighted to look up to the ambassadors.

“Having the kids run up to you for your trading card afterward is a great experience,” senior and Sundevil Ambassador Steven Huynh-Tran said. “After every skit, kids want to have your specially signed trading card with your photo and your beliefs and interests on it.”

The elementary students bring excitement and a new atmosphere to each performance. This, along with the size of the crowd, can cause tension for the ambassadors.

“We perform to the entire school so depending on the size of the school it can range above 500 students,” Huynh-Tran said. “It’s a bit nerve wracking. There’s a lot of nerve that comes with presenting to a large audience but we have fun with it.”

The ambassadors have full creative authority over the skits, leaving room for their individual personalities to shine through.

“The ambassadors are awesome,” Ramirez said. “They work everything on their own and I really don’t have much to do but manage paperwork.”

Huynh-Tran has channeled that creative freedom and implemented it onto the center stage.

“I turned out to be the Super Sundevil,” Huynh-Tran said. “I wear a cape and horns during the presentation and interact with the students to determine whether the situation is good or bad. It’s fun to be comedic and all the kids love it.”

The ambassadors will be creating and performing skits to surrounding PUSD elementary and middle schools all year. The success of the program is rooted in a universal passion for inspiring the youth to be stand-out citizens. Ramirez notices radiant positivity in the ambassadors.

“I like that they are very self motivated,” Ramirez said. “All the ambassadors. They are very gung-ho about everything and they want to be good role models for the kids. It’s very self-driven and I like that about it.”

For Huynh-Tran, the program is all about the children and how the words of the ambassadors can truly inspire.

“Being able to connect with the younger children and being a person they can look up to for guidance is fun,” Huynh-Tran said. “I hope one day they will grow up to be an ambassador.”

Laura is a senior at MC and news editor on the SUN staff. Besides a passion for chickens and ranch houses, she enjoys the unpredictable nature of life.