Behind the scenes with techies Almost, Maine

Mr. Raskin: Writing His Own History

As the school year settles into October, the drama department is working hard to prepare for the annual fall play.  But while the actors and actresses practice their lines for the upcoming play Almost, Maine, another less obvious group of students, referred to as techies, work diligently to create the stage on which the performance will take place.

Senior and stage manager Katheryn Shamshoum plays a crucial role behind the scenes.

“As stage manager my job is to make sure everything gets done,” Shamshoum said. “I keep the director, Ms. Jones, on track, make sure the actors are on time, [and] during the show I am the one calling all the shots backstage.”

Junior and producer Jackie Tinga focuses on the financial aspects of the play.

“I have to see how much each section of the techies are spending, how much is coming out of the budget for the play, and make sure they don’t go over [the] budget,” Tinga said.

Tinga also notes that the work schedule may vary depending on a techie’s crew.

“Everyone has their own schedule.  They [general crew] stay here from after school until six and sometimes even [come] on the weekends,” Tinga said. “I come here everyday on a school week with Monday being the longest day for me because I have to stay for a meeting.”

“[We work] right after school until six before hell week and then every Saturday from nine to five,” Porter said. “During hell week, we’re here after school ‘till eight or nine. During the [week of the] show we get a little break, come back at four or three and we stay here until eleven.”

Shamshoum believes that despite the heavy workload, her relationships with the actors and techies are the best part.

“The best part would definitely be the special bond you get with everyone working on the show.  By the end we are always such a big family,” Shamshoum said.  “This is my seventh production, so I am already so close with all of them.”

Shamshoum describes the relationship between the actors and techies as being appreciative and that everyone helps each other out.

“Actors need techies to do everything behind the scenes, and techies need the actors to actually be on stage,” Shamshoum said. “Everyone in the theater always learns to appreciate each other.”

Tinga agrees and emphasizes that no single group is more important than the other. 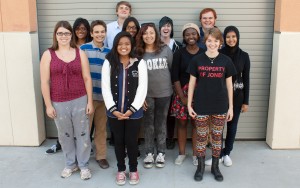 Brianna Ganzon is currently a junior who enjoys the finer things in life like going to the beach, eating frozen yogurt, scuba diving, watching Doctor Who marathons, listening to alternative music, and hanging out around San Diego with her buds. She is both a cartoonist and staff writer on the MC Sun.
Previous Review: Doc Martens A-
Next Girls’ volleyball wins tournament despite shortage of players

In the second quarter of 2008, construction started on a crude oil pipeline that was …