After the widespread success of shows like “Orange is the New Black” and “House of Cards”, Netflix has produced yet another original series that has become the latest craze; a mini-series called “Stranger Things”.

Just in the span of eight episodes, this sci-fi thriller packs action into every second. The general plot  revolves around a missing child mystery, a parallel universe inhabited by a horrifying supernatural being, shady top-secret laboratories, and a strong female protagonist with unworldly powers. 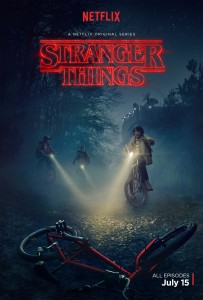 One of the show’s many complicated yet brilliant attributes is the character development. Eleven, played by Millie Bobby Brown, is the young protagonist who was raised in a lab for experimental purposes. Eleven captivates viewers with her innocent face and shaved head paired with the strength and boldness that hides behind it. Something about the way she undauntedly wipes the blood from her nose after emitting her powers makes her admirable yet intimidating. The other main characters include a foursome friend group of tween-age  boys. Mike, played by Finn Wolfhard, is the compassionate leader with shining ethics, making him naturally endearing to audiences. Dustin, also known as ‘Toothless’, played by Daten Matarazzo. He’s the underrated, baby-faced boy who mostly cracks jokes but surprises audiences with a few moments of intelligent clarity. Then there’s Lucas, played by Caleb McLaughlin. The skeptic of the group, he rationalizes every decision and isn’t afraid of countering the group’s ideas. The three boys team up with Eleven to help find their missing groupee, Will. Will’s mother, played by Winona Ryder, is perhaps the most fascinating and well-executed character. She assumes the role of a grieving mother with just the right balance of crazy, independence, and determination. Along with many others, these quirky personalities make the TV screen even harder to tear away from.

Though this genre might not be everyone’s scene, it cannot be argued that the setting itself is something else. Staged in the 80’s, the producers channeled every aspect of the era down to a tee. The special effects of the series include old school sci-fi techno instrumentals, which is also incorporated into the theme song. Each episode is numbered by chapter, and the words loom toward the audience in neon signage and then fade out in typical 80’s fashion.

The producers also took attention to detailing regarding pop culture and 80’s styles. The boys are immersed in a childhood full of Dungeons and Dragons, comic collecting, and walkie talkies and bikes as their sources of communication and transportation. The presence of payphones and photo development rooms are also established, resurfacing nostalgic memories for viewers who grew up in the eighties as well as a greater appreciation of Visually, each and every font used in branding and labels have an 80’s-esque feel. Ringer t-shirts, high-waisted pants, and large-lensed glasses all contribute to the feeling that you’ve been blasted back in time.

While the show has been a phenomenal hit, a second season is not even in the makings yet. Cherish every episode, because it may be a while before “Stranger Things” fanatics can indulge themselves in the next nail-biting string of events.