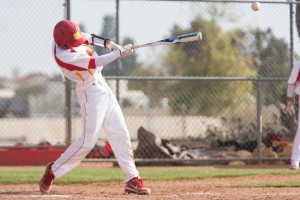 However, once the dust settled, and the buzz of the playoffs wore off, it was time for the boys to get back to business, spending most of the winter practicing and preparing for the upcoming season.

Since games started in the beginning of March, the team has played four games, starting off with a record of 1-3. Though none of these games were in league, it’s been a struggle to get momentum going into the season. Senior Zach Martirano claims the goals for this year are very high.

“After winning last year, we expect a lot of ourselves,” Martirano said. “I think the biggest thing to overcome is the pressure. We overstress sometimes.”

Though there are many varsity veterans, the dynamic of the team this year is different than previous years.

“This year’s team is a bit more focused on the competitive nature of high school athletics,” Coach Mueller said. “These guys want to win, and if we play as well as we’re capable, it is going to happen more times than not.”

There’s an extra special camaraderie among the players, due to the fact they’ve been playing for a long time.

“This group of guys is really close,” Martirano said. “We fight for each other, and play as best we can. There’s a sense of brotherhood.”

When facing tough teams like Rancho Bernardo and Poway, there’s a strategy to keep the energy up and keep pushing, even when the score is not in their favor.

“We need to relax and play with confidence,” Martirano said. “We are a good team, and we just have to keep competing every day.”

Coach Mueller has complete confidence in his team, and believes they can go just as far as they went last year. According to him, we should be a feared team.

“I think we’ll be someone to reckon with in the Palomar League,’ Coach Mueller said. “We will return to CIF and have the opportunity to win the Division III championship.”

Even though the sports videos at the black light pep rally hinted at a rivalry between the baseball and lacrosse teams, it isn’t serious.

“It’s all just fun and games,” Martirano said. “We have friends on that team, and it’s not even a playful rivalry, more of us just joking around.”

All joking aside, they should keep an eye on Sterling the Duck. Patrick Gannon ate that peep with incredible tenacity.

Danielle has been a staff writer for the MC Sun since her sophomore year. She plays volleyball, goes hiking, watches movies, and enjoys long walks on the beach.