The Iowa Caucus is in four days, and presidential candidates are aiming to snag as many remaining undecided voters as possible. Tonight’s Republican debate is, for many candidates, the last opportunity to interact with the men and women of Iowa before they head to the polls.

Hosted by Fox News, tonights debate in Marshalltown, Iowa is the 7th debate so far between the Republican hopefuls.

Presidential candidate Donald Trump will not be attending.

“I have zero respect for Megyn Kelly,” Trump said. “I don’t think she’s good at what she does and I think she’s highly overrated. And, frankly, she’s a moderator; I thought her question last time was ridiculous.”

Trump has decided not to attend the event due to a feud with Fox moderator Megyn Kelly. In a previous debate, Trump accused Kelly of being biased against him; he believed the nature of her questions were “out to get him.” And in the ensuing days, the first of many Trump statements sparked controversy, as he referred to Kelly’s menstrual cycle. 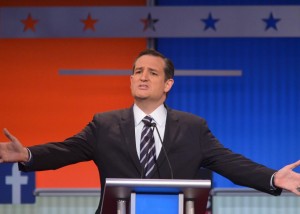 Presidential candidate Ted Cruz will take center stage in tonight’s debate with Trump’s absence. Cruz claims Trump’s boycott is a disservice to the people of Iowa, and that he his putting his feud over the needs of the country.

Accusations of acting unpresidential and childish, to being scared of tough questions are circulating the internet.

Cruz has challenged Trump to a one one debate this Saturday, and if he attends, a pro-Cruz super Pac will donate 1.5 million dollars to support our veterans. The Trump campaign has said “that if Cruz is the last man standing and it comes down to a two-person race, then Trump will be happy to debate him.”

Steven is now a senior at MC, and Co-Editor-In-Chief of the MC Sun. He enjoys playing volleyball and has been playing it for a number of years now. Besides volleyball, Steven enjoys to eat in his free time. He loves Italian food, Hot Cheetos, and anything that's high in sodium.