Cynically described as a socialist fever dream by Republicans and proclaimed by Democrats as a solution to the climate crisis, the Green New Deal (GND) has sparked yet another contentious conversation about economic and environmental reform led by the government. While each side is quick to make partisan-biased statements, either about the effectiveness of the resolution or the illegitimate fantasy it paints for others, the GND becomes hard to comprehend the proposal in its entirety. This is an articulate breakdown on the GND that will hopefully clear up any confusion.

In a historical sense, the familiarity with the name may come from the famous New Deal conducted by former President Franklin D. Roosevelt that helped recover the U.S. after the Great Depression devastated the national economy and tore households apart across the nation in the 1930s. Almost a century later, the GND emerges as a core movement led by the Green Party. While it may seem recently developed, the GND is not a new concept. New York Times columnist, Thomas Friedman, first wrote about this idea in his 2008 book titled Hot, Flat, and Crowded: Why we need a Green Revolution – and How it Can Renew America. He proposes the GND as a solution to not only the global environmental problem but also a reinstatement of America’s international leading position, as it did during World War II.

Its recent infiltration in the media can be credited to the 2018 midterm elections and the Sunrise Movement, an American youth political action organization, who held a sit-in in front of the Speaker of the House of Representatives, Nancy Pelosi’s office regarding climate change action. This encounter took place after the release of two environmental reports from the United Nations and Federal Scientists that warned of global temperature rises, worsening wildfires, heat waves, and droughts in the U.S..

Curated by New York Representative Alexandria Ocasio-Cortez and Senator Edward J. Markey of Massachusetts, the resolution calls for the federal government to disengage the U.S. from fossil fuels and curb greenhouse gas emissions across the economy. Alongside advocating for climate change action, the deal guarantees new high-paying jobs in clean energy and sustainable industries to help diminish the presence and reliance of the fossil fuel industries.

While the GND works to redirect the government’s perspective on environmental action by advocating the reduction of greenhouse gas emissions, it also serves to resolve gaps in economic inequality and racial injustice. The GND’s plan of action for social justice is directed at pinning the government responsible for creating “good, high-wage jobs” as part of its 10-year national mobilization, referred to as the “Green New Deal Mobilization,” motivated in part by a World War II-type mobilization.

The mobilization touches most aspects of the U.S.’s economic and social circumstances from farming to transportation. More specifically, the plan calls to build resilience against climate change-related disasters, upgrade infrastructure, meet 100% of the power demand throughout the nation through zero-emission energy sources, create a “smart” power grid for affordable clean energy, and transition to zero-emission vehicle infrastructure, among other actions.

Furthermore, the GND goes as far as to propose that the U.S. should take an international leading role in climate action with the goal of helping other countries to achieve a GND themselves. It even sets goals for the world to reach net-zero global emission by 2050, with the U.S. achieving net-zero emissions by 2030.

Republicans view the GND as an ambitious socialist resolution requiring the whole of America to become forward-thinking. President Donald Trump was quick to sarcastically repudiate the GND on his twitter on Feb. 9.

“I think it is very important for the Democrats to press forward with their Green New Deal. It would be great for the so-called “Carbon Footprint” to permanently eliminate all Planes, Cars, Cows, Oil, Gas & the Military – even if no other country would do the same. Brilliant,” President Trump tweeted.

A procedural vote through the Senate is planned to take place on Mar. 25 to determine whether or not the government will take up the GND. With a requirement of 60 votes to pull through and the quick judgments from the GOP, there is little prospect that the resolution will make it. That is not to say that the GND will be gone forever.

With the 2020 Presidential election approaching, the Democratic party is racking up candidates left and right, with many of them in support of the GND. While the GND may be shut down later this month, there is no reason to say it will not resurface as one of the critical debate topics during the 2020 election.

As long as global temperatures rise, the GND will always exist as an aspect of American history. Whether it be the reason America appears to prosper for future generations or the headline of a missed opportunity to combat global warming on a national level, the GND has instilled itself as a relevant idea critical to both the environmental and political fields in America right now.

Jana is a Senior at MC and the Co-Editor in Chief of The MC Sun.
Previous Everything that happened in New Zealand during and after the Christchurch terrorist attack
Next Manchester Pride needs to say ‘thank you, next’ 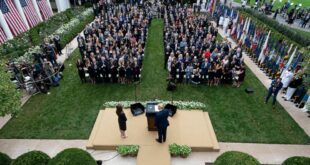