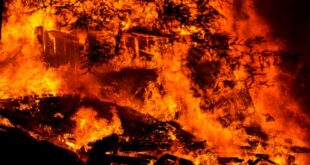 Sunday Aug. 31 at the Wave Waterpark, a young boy was witnessed coming down a slide at the Slide Tower attraction upside down. Once at the bottom, he stood up in the shallow splash pool holding his head.

“This past Sunday, our lifeguards responded to a guest who had pain in his head. The lifeguards responded according to their training protocols and the guest was transported to the hospital for examination as a precautionary measure,” a member of the Wave Waterpark staff said.

The park staff remained in contact with the guest to assess their condition.

“We have since spoken to the guest contact and they reported to us that the patient was doing fine with no injuries found during the examination. The guest thanked us for our response, treatment and precautionary measures provided by The Wave staff,” a staff member said.

California is facing one of the most severe droughts on record, so why do recreational, water consuming parks like The Wave remain open?

According to the park staff, the amount of water used at the park varies and depends on the day, weather, and amount of park-goers.

“Waterparks are surprisingly low on water consumption since water is reused over and over again,” a Wave staff member said.

The park water is constantly being reused and cleaned. It goes through a sand filtration system and is treated with chlorine and other water sanitizing agents. Many water conservation methods are being implemented in the park.

“ We use pool covers to prevent evaporation and we monitor our systems to ensure we aren’t wasting water through leaks,” a staff member said.

The park had their ‘14 opening day on May 24. Due to the weather change and the decline in the amount of park-goers the park will be closing on Sept. 22. The park will re-open when the ‘15 season begins.

Though the safety of visitors at the park and the water usage has been a topic of debate, The Wave Waterpark appears to be following all precautions and conservation methods.

Priyanka is a senior and news editor for the MC SUN. She spends her time running long distances as a varsity cross country and track athlete, yet despite all her training, Priyanka has yet to conquer her mortal enemy: stairs.
@priyanks_
Previous Girls golf swings into action
Next Dear White People

“I can’t breathe”: The History Behind Black Lives Matter