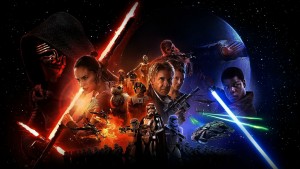 Ever since its debut in 1977, the Star Wars series has no doubt become one of the most popular film franchises in the United States. Somehow, George Lucas managed to bury heroes like Luke Skywalker, Princess Leia, and Han Solo deep into all of our hearts. Now in 2015, the producers of Star Wars have brought back this beloved series to its fans.

Star Wars: The Force Awakens is a mix of intense drama and cutting edge action. Premiering on Dec 18, the film takes place 30 years after episode six in the Star Wars film series. When producers first announced that they were working on a new addition to the legendary series, fans went crazy with excitement. By the time movie tickets were first released online, this fervor had not died down in the slightest. The site for ticket sales unsurprisingly crashed due to all the fans fighting tooth and nail for precious tickets to see the movie of the century. Viewers were not disappointed when they discovered all the surprising new revelations, unforeseen plot twists, and the introduction of many new unanswered questions.

A lot has happened in the time span between Episode VI and this new episode.  It’s no surprise that Han Solo and Leia have indeed followed their hearts’ desires and created a family together. They had a son named Ben Solo, who decided to follow in the paths of his uncle, Luke Skywalker, and become a Jedi.  However, after Luke took Ben under his wing as a Jedi trainee, Ben turned to the Dark Side and became Kylo Ren. In a disturbing parallel to his grandfather Anakin in Episode III, Ben’s transformation into Kylo  resulted in him killing all his other Jedi classmates and fleeing to his new dark master. Devastated by his betrayal, Luke retreats to an unknown secluded location, where no one can find him. This leads us to the present time and where the movie starts off in this engrossing adventure.

Star Wars: The Force Awakens introduces us to several new central characters Rey, Finn, Poe, and droid BB-8. In the beginning of the film, we learn that each character comes from very different parts of the galaxy. As the story evolves and revelations are made, we watch how their individual stories clash and come together. Throughout the movie, the new characters grow, change, and impact everyone else in the galaxy.

Don’t we all just love the comical droids in Star Wars? When fans learned that a new droid was entering the Star Wars franchise, the applause sounded from one end of the galaxy to another. BB-8 is a new spherical shaped BB unit who assists the main characters in the new Star Wars movie. The little orange and white droid immediately captured the hearts of all fans, bolstering excitement to watch BB-8 in action in The Force Awakens.

Rey, the main character, is a very empowering and tough young lady who unexpectedly learns that the force is very strong with her. Coming from the poor desert planet Jakku, Rey was abandoned when she was a child and left alone to fend for herself in an unfair world. Merely by chance she runs into BB-8 and, even though she doesn’t know it yet, that moment changes her life forever.

Finn, another exciting new character, started out as a Stormtrooper in the beginning of the movie. When on his very first mission, he caught sight of how mercilessly Kylo Ren took innocent lives. Finn decided then and there that he was fighting for the wrong side. This event leads Finn to become a traitor to the Stormtroopers of the First Order (the evil force revived from the ashes of the Empire). On the spaceship he was trapped in, he meets Resistance pilot Poe Dameron, who was being held prisoner (he renames him Finn instead of his Stormtrooper serial number FN-2187). After they make an escape, Finn lands on Rey’s planet. Later, Finn runs into her, thus marking the start of his adventure as well.

After running into the iconic Han Solo, Chewbacca, and General Leia Organa, the new team sets out to defeat Kylo Ren in the name of the Resistance  The events of this movie appear to have some parallelism with previous movies. For example, Ben Solo is much like Anakin Skywalker, being that they both turned to the dark side. Rey is also a lot like Anakin Skywalker, as well as Luke, because they both started out stranded on poor planets hoping for a better future. In A New Hope, the Rebel Alliance has to destroy the death star, and in The Force Awakens they are forced to destroy the Star Killer base. Furthermore, Rey searching for a reclusive Luke Skywalker in an isolated location highly matches to Luke Skywalker’s situation when he needs to find Yoda. Are all these similarities on purpose? Very much so. Director JJ Abrams has a tendency to create themes, and use them again for the purpose of viewing technique. Whatever he is doing, the abundance of Star Wars fans proves he is doing it right.

Whatever comes next in this riveting film series will continue to be supported and cherished by all the Star Wars fans in the universe. We can’t wait to see what amazing creations are in store for us in the future far far away.