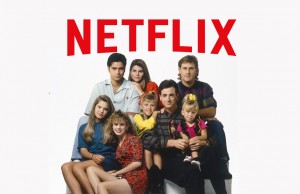 Whatever happened to predictability? The milkman, the paperboy, evening TV? How did I get to living here? Somebody tell me please! This old world’s confusing me.

These iconic lyrics are known around the world as those that welcomed Full House onto our television screens. The family that included Danny Tanner, Uncle Jesse, and Joey Gladstone was adored by millions around the world. After eight seasons of laughs, tears, weddings and break-ups, Full House came to a close. However, in the year 2015, twenty years after the well-known end, the Tanners are back.

Fuller House is the title of the new Netflix series that will welcome the recognizable characters back into the homes of millions. The premise revolves around DJ Tanner-Fuller (Candace Cameron-Bure). She is no longer the awkward-turned- gorgeous high school student, struggling with dating and her younger siblings. DJ is now a widow and mother of two, and expecting her third child.

This plot parallels Full House almost to a tee. Just like how Danny Tanner was a widower in the beginning of Full House, DJ is recently widowed in the beginning of the new show. This premise, although strangely similar, beckons the idea that screenwriters followed “if it ain’t broke, don’t fix it.”

Fuller House’s regular cast stars Candace Cameron-Bure as DJ Tanner, Andrea Barber as Kimmy Gibbler, and Jodie Sweetin as Stephanie Tanner. It has also been reported that many of our old favorite  actors will make special appearances, including John Stamos as Uncle Jesse, Dave Coulier as Joey Gladstone, and Bob Saget as Danny Tanner.

As the world waits on the edge of their seats to witness this long awaited reunion, we can only hope that Fuller House will live up to its expectations.

Morgan is a senior at Mt. Carmel High School. She is kept constantly busy with varsity field hockey, Hebrew school, swim team, and being the co-Editor in Chief of the MC Sun. She has a problem with watching too much TV, and eating an excessive amount of snacks. She knows the lyrics to practically every Billy Joel song, and doesn't care who knows. She also knows about most celebrities, and can answer your questions almost as fast as the internet.