The International Olympics Committee (IOC) session in Rio de Janeiro planned for a more modern evolution of the Olympic games.

The committee created a more urban theme to appeal to the younger generation, with plans to stage the skateboarding and sports climbing events in temporary locations in city settings.

Keeping with the urban theme, some of the new sports include skateboarding, sports climbing, BMX-freestyle cycling, and three-on-three basketball.

The IOC hopes that the more modern sports inspire youth athletes and appeal to the younger generations.

“We want to take sport to the youth,” IOC President Thomas Bach said.

Other sports such as swimming,  cycling, and track and field are adding more events in their sports.

Another notable sport being added is karate, a traditional Japanese martial art, similar to Taekwondo. The 2020 games are being held in Japan. 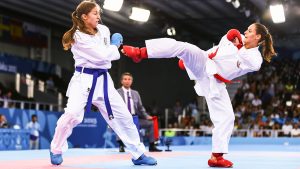 However, with the addition of new sports comes athlete cuts. With the new influx of events, the IOC removed nearly 300 athlete spots, with track and field taking the brunt of the damage with over 100 athlete spots being removed.

On the other hand, the new summer olympics is gaining 18 events, and 474 athletes.

Also, nearly 49% of the athletes participating in the Tokyo Olympics will be female, giving the female athletes their time to shine.

“I am delighted that the Olympic Games in Tokyo will be more youthful, more urban and will include more women,” Bach said.

The new sports have created a modern evolution of the century old games, bringing the sports to our generation’s youth, inspiring future athletes and giving spectators a new exciting Olympics.

Isaiah is a Staff Writer and Video Editor for the Sun. His hobbies include eating massive amounts of unhealthy food after training, asking people random questions, and sleeping until noon on weekends. He is overly hyperactive and very dangerous. Do not pet the Isaiah. He will bite.
Previous Shane Daly: Lifeguard of the Year
Next A new style