Ernst & Young, a major accounting firm, seems to have taken a page out of The Stepford Wives book and interpreted it completely wrong. The satirical thriller,  written by Ira Levin, points out the gross expectations of men and women. This is expertly done with the alarmingly submissive wives featured, pointing out the imbalance between the sexes. Ernst & Young clearly missed the memo that the piece was an intended parody, and instead have used the novel as a source of inspiration for their latest sexist seminar.

The large financial company had a training presentation on the ‘pathway to success’, which gave guidelines to women employees on how they should act around men and what is deemed appropriate. Women were told to avoid confronting men and to be compliant since being outspoken can be perceived as threatening to male workers. Apparently, for Ernst & Young, confident, strong-willed women are just not the proper qualities to have in a fast-paced and competitive field.

The remarkably outdated seminar can be summed up in their own bizarre analogy.

“Women’s brains absorb information like pancakes soak up syrup, so it’s hard for them to focus. Men’s brains are more like waffles. They’re better able to focus because the information collects in each little waffle square,” a presenter said.

A seminar-attender and the former executive director of the company shared the information with Huffington Post under the anonymous name “Jane”, in fear of her superiors. Without this brave individual, Ernst & Young would continue to go about with their discriminatory seminars unchecked.

The company also included some not-so-helpful tips on how a woman should dress. Unwarranted advice like “wear well-cut attire that complements your body type,” and “don’t flaunt your body ― sexuality scrambles the mind” were included.

How a major corporation allowed a presentation that included such belittling and misogynistic instructions to be written and then spread is beyond me. Not a single member of staff noticed the absurdity of these demands in 2019. There is either a clear abuse of power causing employees to cower in silence or an even more terrifying alternative: no one cared enough to say anything. One thing is obvious; there is a distinct lack of women in leadership, and seminars like this are just enforcing this fact.

This feels likes like peculiar timing especially since the seminar takes place only weeks after the company settled a sexual assault lawsuit from a former employee. During a time where the #MeToo movement is more prevalent than ever, one may think a public lawsuit would be the wake-up call for the major corporation.

Ernst & Young is in desperate need of revision of codes of conduct if they expect to continue thriving in a world where more than half of American women are breadwinners according to the Dallas Business Journal.

Once news of the presentation broke out,  the large financial company’s response to the disclosed seminar was frankly lackluster. It included no apologies for the blatant sexism or promise for change. Instead, the company took this moment in the spotlight to boast.

“EY has been — and remains — a highly recognized and award-winning leader in fostering a culture that promotes inclusion and a strong sense of belonging for all. We are, and remain, unrelenting in our effort to continue to set the standard for a best-in-class culture and work environment,” the company reported to Huffington Post.

The appalling mindset this company and others share is almost laughable if not frightening in 2019. Times are changing, or more accurately have changed, and this type of attitude can no longer be tolerated. Corporate women aren’t asking for much, just respect and common courtesy, which doesn’t seem to be too common these days.

Leyana Nabi is a junior and the sunburn editor for the MC Sun. She's always down for a good laugh and is an avid fan of the Mamma Mia movies.
Previous Is Facebook Letting Politicians Lie?
Next The King: Even Royals have Fake Friends 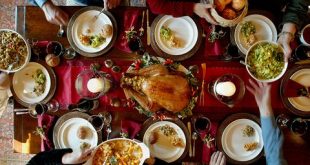 As soon as the spooky Halloween season draws to a close, the masses of America …