In 2015 Bobby Paul Edwards, 53, was arrested for enslaving and beating John Christopher Smith, a disabled black man. Edwards, a white male, had been Smith’s employer for the entirety of the time of the abuse. On November 4th, 2019, Edwards was sentenced to 10 years in federal prison.

Edwards was initially charged with a misdemeanor assault but after federal investigation the charges were raised.

After his Edwards’s arrest, it was announced that Smith will be receiving $272,952.96 in restitution. Smith was forced to work without pay for long hours and faced physical abuse with metal tongs, fry pans, and was locked in freezers. He was enslaved for 23 years and abused for at least  least 17 of them.

Edwards had given Smith, who is now in his 40s, a small room in the back of the restaurant. Smith later became a buffet cook and was forced to work 100+ hour weeks without days off. “This abusive enslavement of a vulnerable person is shocking. The FBI is always vigilantly searching for these offenses and stands ready to bring perpetrators to justice and help victims reclaim their lives,” FBI Agent Jody Norris said. Human and labor trafficking are not uncommon in North Carolina, according to the National Human Trafficking Hotline, 895 victims were identified in 2017.

Leyana Nabi is a junior and the sunburn editor for the MC Sun. She's always down for a good laugh and is an avid fan of the Mamma Mia movies.
Previous Netflix’s The Politician deserves your vote – and your views
Next Essential Oils Create World Peace 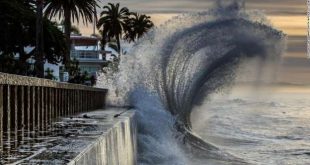 By 2025, New York’s Staten Island will be surrounded by a towering seawall running 5.3 …