Sorrow strikes the nation in reaction to the Umpqua shooting

Freedom at Risk in South Dakota 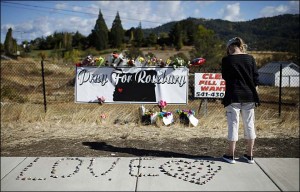 On Oct. 1st, the tragedy of yet another school shooting shook our nation. Victims’ families and strangers alike all united in grief over the nine lives lost at Umpqua Community College.

After the initial shock and trauma subsided, survivors and witnesses gave their accounts of the attack, piecing together an image of what the scene was like.

The gunman, Chris Harper-Mercer, an enrolled student at the school, barged into his English class, armed with a gun. After later investigation, it was discovered that he had obtained multiple illegal firearms, nine of which he brought on campus.

One student, Anastasia Boylan, recalled his frightening words upon entrance, “I’ve been waiting to do this for years.” He then shot the professor, Lawrence Levine, the only staff member who was killed.

The gunman then proceeded to direct his attention towards the students, selecting his victims in a rather particular process.

Students were commanded to stand up, and Harper-Mercer went to each one, asking if they were a Christian. If they confirmed a connection to the faith he would say, “Good, because you’re going to see God in just about one second.” Believers fell to the ground as shots rang out.

After reaping death in the English class, the gunman went to another room, where he exchanged fire with policemen. It is unsure whether he was taken down by the forces or if his death was self-initiated.

Students from neighboring classes added their take on the grim and precarious atmosphere on that day.

Cassandra Welding mentioned the panic felt by her and her peers as they sought cover after hearing the frightening gunshots. Some of the hardest phone calls were made that day, as students and loved ones  exchanged possible final goodbyes.

Following the incident, after police contained the scene and students were rejoined with their families, many loose ends were tied together as pieces of the puzzle started to appear.

It was recalled that the gunman had handed a student a box, instructing him to make sure it got delivered to the police. The box was searched, and inside were writings from the gunman, informing the police that he was a perpetrator of previous shootings. He was angry that other shooters weren’t taking the initiative to take down the authorities.

As the nation grieves over those lost in yet another school shooting, the 45th one in 2015, the stress on stricter gun laws has become higher than ever. President Barack Obama mentioned in a speech postliminary to the shooting that the nation must acknowledge the problem at hand rather than neglect to take preventive measures.

“We know that other countries, in response to one mass shooting, have been able to craft laws that almost eliminate mass shootings, friends of ours, allies of ours — Great Britain, Australia, countries like ours,” Obama said. “So we know there are ways to prevent it.”

Americans can only hope that this will be one of the last times tears are shed over death by gun misusage. As a restitution, many people unearthed a positive message from the situation by viewing those who died as martyrs to awaken America to this growing issue.

On Sunday, February 9th, the Swiss government passed a law that was a win for …