A lesson in comedy: MC Improv’s Students vs. Staff game 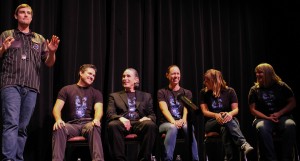 The line outside the PAC stretched all the way back to the C building on Friday (Nov. 13) night, packed full of desperate students looking for a laugh after the devastating last day of finals. MC Improv timed its first ever Students vs Staff improv game perfectly. All Sundevils  needed the therapy of the teachers who kept them in line every day running around onstage doing on-the-spot comedy for two hours.

Some of the highlights included: a running joke about rounding grades, debates over Donald Trump’s hair, the staff kicking the students around the stage, Jenkins whipping out sunglasses to serenade Davis, Raskin’s one-liner about Sigmund Freud and his “noodle,” Bolin hosting a game show panel where she was asked why APEL teachers sabotaged grades, Talbert killing it in the Beastie Rap, and Davis giving advice as a remarkably convincing dog yoga teacher.

All this entertainment didn’t come without some convincing from the students, however.

“When I organized it, I gave the teachers the practice schedule months in advance,” Goldfarb said. “I didn’t want to throw them in without any practice, so we went over the games. We had five practices with the teachers and we went over all the games and all the rules. We had a few rehearsals. I think that made the teachers more willing to do it because they weren’t just thrown into it.”

These practices served as a crash course for the staff, with extensive help from the seasoned improv team, eventually paying off in the hilarious events of the real game.

“We had practices that were run by the team and their coach, and we would practice the games and they gave us suggestions,” Bolin said. “The team members were very, very helpful. They showed us how to do everything and were very supportive.”

The Students vs Staff game was just one of the many components of the much more promoted improv team.

“There’s more publicity,” Goldfarb said. “Last year, everything was publicized the week of, and I’ve been trying to do a lot of things in advance. I have someone doing the cards and making them differently every game, so they’re a lot more interesting, and people don’t tend to throw them away. I’ve been printing out a lot of posters and trying to put those everywhere more in advance, so more people know about it. And also having everyone retweet and favorite and like it on social media.”

Of course, publicity only goes so far. The improv team practices every Wednesday from 3 to 5 pm. They worked on their knowledge of the approved league games, team dynamics, and- most importantly- thinking on their feet.

“I don’t know if there’s a specific way you can get better, it’s just doing more improv and games, that kind of stuff,” Goldfarb said. “It’s more just being quick and practicing, I guess. There’s no definite way. It just comes with practice.”

And because performing and stage presence are such essential parts of improv, the players have to get comfortable with attention.

“I remember before when I was a freshman and sophomore I didn’t do improv at all, and I wasn’t in drama,” Goldfarb said. “I kind of just walked around, went to my classes, talked to people around me. I was never shy, but I wasn’t extroverted, I don’t think. I just kind of did my own thing. And once I did improv and I got into drama, I didn’t really care what people thought. I kind of let go of judgement. Because once you’re onstage in front of 400 people, you’re so exposed. There’s no way to bottle it back in. It doesn’t really faze me any more. Improv helped me with that.”

On the other hand, many of the teachers had no performing experience.

“I was in marching band, but I never had to speak or be all by myself and have the whole crowd looking just at me, so this was definitely different,” Bolin said.

So why would they agree to this? 400 of their students and peers watching them make up jokes on the spot, with a high chance of awkwardness?

“It kind of had to do with the kids who asked,” Bolin said. “I knew three or four of the kids who are on the team. They encouraged us to do it. And I think both Mrs. Davis and Mrs. Talbert said, ‘If you do it, I’ll do it,’ so basically we had to do it.”

And the risk paid off. The teachers thrilled the crowd, and even proved a personal point.

“There was a category where they said musical instruments, and I know that my friends in the front row were dying, because I always talk about band,” Bolin said. “They make fun of me for it, but it helped me.”

Annie is a senior and a co-editor-in-chief for the MC Sun. Her hobbies include dodging questions about her future, driving on an empty tank of gas, and forcing people to look at pictures of her dogs.
@anniecprice
Previous Senior Spotlight: Dashawn Copp
Next Dissension in the district

If you are wondering who to vote for for “prettiest hair” or “best sniffer,” look …