“I had a year that nearly sent me off the edge/ I feel like a five, I can’t pretend/ But if I get my shit together this year/ Maybe I’ll be a ten.” The opening lyrics to “10/10” the first track on Alex O’Connor’s new album, Pony.

From Soundcloud to international fame, O’Connor, commonly known by his stage name Rex Orange County, has released his third album titled Pony. The audience for this album is much larger than the one he had back in 2015  as a 16 year-old music student self-producing an album.

Consisting of ten tracks, Pony explores the mind of O’Conner with each song traversing his inner thoughts about life and love, both common attributes of O’Connor’s past music albums.

Different from his past however is the production behind the album. Pony was produced by Sony; previous titles  Bcos U Will Never B Free and Apricot Princess  were both almost entirely produced by O’Conner himself. The change in production team is obvious from his latest album as O’Conner appears to have  compromised his characteristic bedroom pop/Indie style to allow room for more sell-able pop appeal, a transition he began in Apricot Princess. Despite this, O’Connor was able to retain  much of his stylistic flare from previous pieces.

The overarching theme of the album is progress and that change is simply a part of life. However, above all things, the album tells a compelling story of O’Connor’s journey through life and his journey to fame.

“10/10” offers the perfect introductory to this story;  it speaks on O’Connor’s past and his extremely optimistic hopes for the future after what has been a rough year. As the album progresses, O’Connor sings about his love and joy all stemming from his past creating his present.

The final track, “It’s Not the Same Anymore” provides the perfect finale to Pony capitalizing on everything the album has built up to. O’Connor sings about his new life with lyrics such as, “I miss the days when I was someone else/ I used to be so hungry/ Right now, my stomach’s full as hell/ And I’ve spent many months just hating on myself/ I can’t keep wishing things will be different/ Or leaving problems on the shelf”. The lyric showcases O’Connor’s worry of what his life of fame has become, but that this change is something he can no longer control and that is okay.

From start to finish, the album has an inherent sense of joy and optimism that can make even the most glum souls feel delight.  Pony is an anthem of acceptance for those fearing the change in their lives. It looks to highlight how opportunities can always be found in uncertainties if one only takes the steps to notice them.

Colin O'Malley is a junior at Mount Carmel and the current feature and news Editor of the MC Sun.
Previous The King: Even Royals have Fake Friends
Next The Most “Paw-Pular” Kids in School 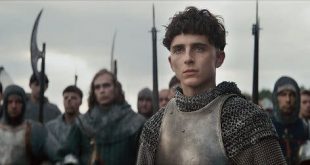 The King: Even Royals have Fake Friends

November 1st brought the beginning of the holiday season, preparations for Black Friday, and the …